So the day finally came – our little man turned 1 last week. Where on earth did that year just go? Seriously, Amelia’s first year went quickly enough but now that I’m running around after 2 kids, my feet didn’t touch the ground as I was chasing my tail around them…then all of a sudden, boom – he’s 12 months old.
Naturally, we wanted to celebrate with a little party and now that Amelia is a little older, we were able to invite a few of her pals around and for the first time ever…I had to plan a chlidren’s party. 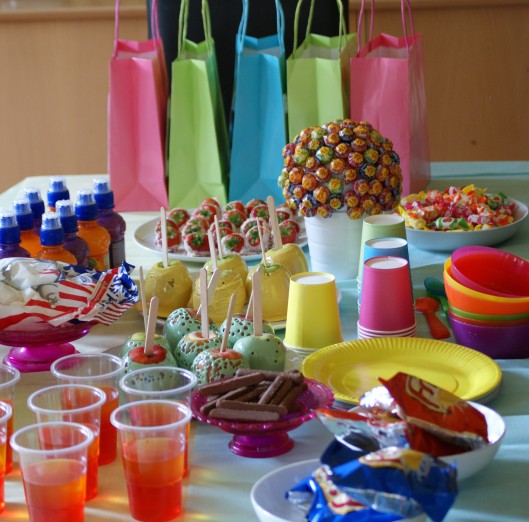 Oh Jesus.
Never done that before.
Give me a professional theatre, an amateur dramatic company of 80 people and a full musical production to get on the stage in six months, and I’m grand. Give me a handful of 3 year olds, their parents, our family and the idea of having to keep them all entertained for ONLY TWO HOURS and I’m a nervous wreck.
Thank GOD for Pinterest – it literally saved me for this party. For the first time ever I actually used ideas that I had pinned. I wanted a colourful theme, so got some inexpensive crepe paper streamers online, and of course the obligatory balloons. I loved the chalkboard idea that I’d found on Pinterest that I’d done for Amelia’s first birthday so I did the same for Adam, to welcome people in as they arrived. 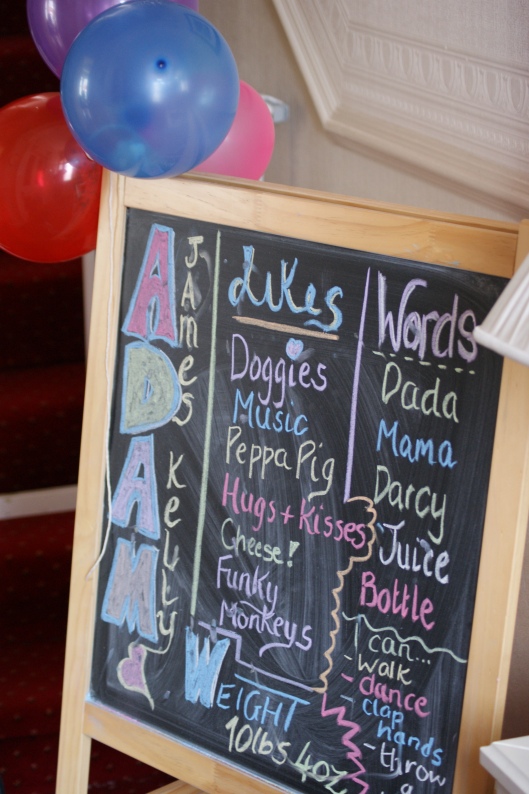 We served coloured candy apples (not as hard to make as you’d imagine!), strawberries dipped in white chocolate with sweet sprinkles (all ideas found on Pinterest) and we complemented it with some colourful sweeties, marshmallows, jelly and I also managed to get some bright plain coloured paper cups and plates in the pound shop. 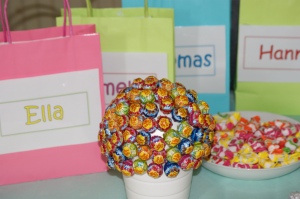 The pound shop was also fab for getting hold of some items to put in the kids’ party bags – crayons, bubbles, sweets and so forth. I also got some paper bags in bright colours online and added my own laminated name tags to each, just to give them a personal touch. I doubt I could do it if there were more than 5 kids at the party, though! I also set up a little craft table with shapes and stickers and pots filled with pens and pencils for colouring in. It seemed to keep them occupied until the food was ready! 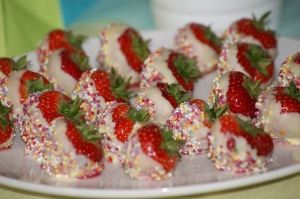 I managed to get some face painting stuff together also and offered that to the kids which they really enjoyed – you definitely don’t need to hire a face painter – you can literally copy from a book or get someone who knows how to do it to give you a quick lesson.
All in all, it went well. No one broke a tooth on a candy apple and the kids kept smiling. It was so special having grandparents, cousins, aunts, uncles and friends all there to celebrate my little man’s special day. Unforgettable.
I did realise something though – I have to do this again.
Twice a year.
For the next 18 years…at least.
Help!

Hello, I'm Emma. I'm a Mum of two and I teach English and Art. I love all things crafts, crochet, literature, makeup, musical theatre, with some sushi and prosecco thrown in for good measure. I've also written a children's book which I'm hoping to get published - wish me luck! This blog is a place I like to record, share, rant, laugh and cry a little at all of life's silly moments and some of the important ones, too. There are so many blogs to read and everyone's time is precious, so thanks a lot for dropping by - I really appreciate it :)