Last week many cities across the world celebrated thier own version of Culture Night. This was the first time I’d had the chance to get out and see it – being too lazy the first few years then too pregnant or tired from sleepless nights the next few.

Not this time, however.

The little man was being looked after by Nana and the G Man was working, so it was up to Amelia and I to get out and soak up our fair share of culture. I was so excited to bring her out and about for her first taste of it. Of course we’ve brought her to museums, castles and classes etc, but this was something different. And anyone who has been to Culture Night Belfast knows what I’m talking about. Belfast gets the typical bad press all the time. Those of us who reside here and choose not to partake of the bigotry and hatred, actually enjoy living a pretty great city – and I was pleased to be able to share the best of it with my daughter last weekend.

Enough of the preaching – what did we get up to? There was literally something for everyone, and what do you know? It was sunny. All evening – a last little vestige of August that hung around just to show its face mid-September. It definitely added to the atmosphere.

Our first destination was the University of Ulster Art College Campus – where Amelia enjoyed some very lively and musical story telling from Polly the Fairy – a great interactive hour with lots of children getting the chance to jump about, sing, dance and listen to ‘Rumble in the Jungle’ – even getting to take away a free miniature copy of the book. A really great way to kick start the evening for little ones. 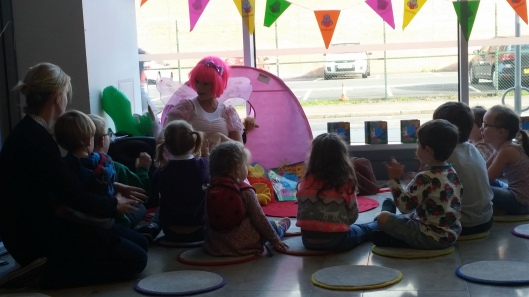 Out into the early evening sunshine and a wander around College Gardens, which was filled with food outlets, craft tables, Jump Jiggle and Jive, brass bands, but to name a few. Amelia wanted to head straght over to the craft tables, where she made a fish (based on The Big Fish) using of course, lots of bright colours and what else – glitter!

Then we enjoyed some dinner sitting under a tree in the midst of all the fun and watched people of all ages create thier own artwork using a watergun filled with paint – aptly entitled ‘What a load of Pollocks’ – Amelia had a go at that next, got thorougly messy and enjoyed every bit of it. 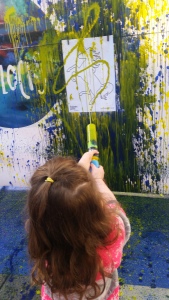 Off next to the Culture Night Octopi crochet art installation, and on the way we strolled past people doing the tango, others planting trees, and enormous 200 strong drum circle led by The Gathering Drum, again to name a small few events. I was quite proud to show Amelia the Octopi installation, having contributed a few little crochet octopi myself to the cause – she was even able to spot some of mine hanging from the ceiling.

Into the Beauty Parlour next, where you could contribute to a graffiti wall labelled ‘Beauty is…’ and many people had finished thier own version of the sentence. Amelia enjoyed making a mask here and we were able to choose some positive words to stick to it – ‘pioneering’ and ‘successful’ – these were important to me – she just wanted to add yet more…glitter. Whatever keeps a girl happy! 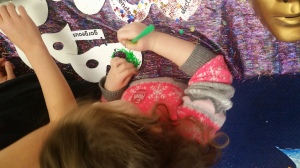 A quick jaunt back round the block watching the occasional musician play in this street, that lane etc and Amelia had some fun drawing her own version of a monster on the enormous chalk boards set up outside The Spaniard – who, incidentally were definitely thinking clearly – advertising drink offers for parents along with slush puppies for the kiddies. Clever. 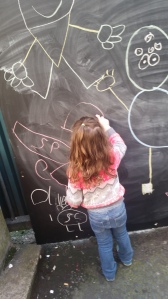 Walking past the Belfast Choir singing a great version of Katy Perry’s ‘Firework’ we headed round to the Belfast Circus School, and were lucky enough to get into their first show of the evening. A bag of popcorn later and Amelia and I were enjoying trapeze and rope artists, comedic dancers and a very funny man who juggled a knife, a lettuce and a carrot – she was most impressed with that. The queue for the second show as we left was HUGE. A testament to the talent and popularity of the place. 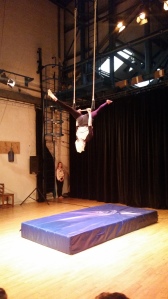 There was so much more we could have done but as the girl herself said, ‘It’s time for bed mummy I miss Adam’ – she wanted her baby brother and some supper and bed. The only thing I was really gutted to miss was a very good friend of mine taking part in a ‘The Big Fat Gay Wedding’ on the steps of The Merchant Hotel – a shout out and awareness raising event for marriage equality here in Northern Ireland and yet another example of why culture night is Belfast at its Best.

Can’t wait until the next one.

Hello, I'm Emma. I'm a Mum of two and I teach English and Art. I love all things crafts, crochet, literature, makeup, musical theatre, with some sushi and prosecco thrown in for good measure. I've also written a children's book which I'm hoping to get published - wish me luck! This blog is a place I like to record, share, rant, laugh and cry a little at all of life's silly moments and some of the important ones, too. There are so many blogs to read and everyone's time is precious, so thanks a lot for dropping by - I really appreciate it :)